This MansionLocation.com website represents a private residence located on the Upper West Side of Manhattan. This exquisite limestone and brick mansion, built in 1900, was designed in the French Baroque style with nouveau influences by the renowned American architect Robert D. Kohn. Besides the double-wide West 106th Street, the home enjoys views of the Hudson River, the bronze equestrian statue of civil war hero Franz Sigel, and the beautiful Riverside Park. This landmark building is part of a designated Manhattan historic district representing several similar-style buildings. In 1900 developers Perez M. Stewart and H. Ives Smith hired renowned architect Robert D. Kohn to design two harmonious, but individual, mansions at the corner of Riverside Drive and 106th Street. Kohn met the challenge, producing two upscale residences that coexisted agreeably next door to one another; but each exuded its own character. One was clad in tan-colored brick, the other in red. Although the larger, corner mansion would steal some of the spotlight, the grand home at No. 322 West 106th Street held its own.

The Miller family are the current owners (and caretakers.) They are in the continued process of restoring the mansion to its former grandeur. This residential building, located on one of the best blocks in New York City (according to Time Out Magazine in 2006) is ideal as a film or photo shoot location. The classic beauty of its interior and its unique limestone and brick exterior create an exceptional working environment. Several spaces within the residence offer a distinct architectural style and atmosphere. From fully paneled mahogany parlor room walls to plaster relief decorations, there are infinite artistic possibilities. Huge sliding pocket doors, 14-foot ceilings, sun-lit windows, French doors, working fireplaces, an ornate semi-curving staircase, period furniture, and crystal chandeliers create a touch of historic elegance. A modern, fully decked rooftop terrace with Hudson River and hip cityscape views add to the flexibility of the space. Furthermore, this mansion is a private residence so your production team is insured full cooperation for your shoot day or night. From a single days shoot to recurring location possibilities, this cost-effective and versatile space offers ample room for the set and crew. Please view the entire website for details and contact us with any questions or comments. Thanks! 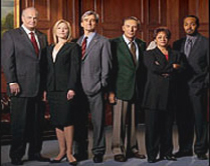 This prime location is available year-round for TV, Film, Music Videos, Fashion, or Product Photography. Well-known Feature Films and Television Series have been filmed here, including scenes from the major motion picture “Hitch” starring Will Smith, and the Emmy Award-winning “Law & Order.” For further information or to arrange a site visit, please click the contact link on the top right side of this page.

The photo to the left shows Will Smith on location at Riverside Dr. Hitch was released in theatres in February 2005. The film, which tells the story of a “date doctor” who teaches men the tricks to getting hitched, was shot exclusively in NYC from March-July 2004, employing 100 NYC cast and crew members. The area around the Mansion is a perfect location for shooting large-budget films. The double-wide street can accommodate the many vehicles, trailers, and staff associated with major productions.

Eight-time Emmy-winner Merrideth Vierira who replaced Katie Couric on NBC’s ‘Today” show said “thanks for the use of your beautiful home” after wrapping up a film shoot featuring her in a commercial about a public health issue.

The award-winning Rap Artist, “50 Cent“ starred in a Reebok commercial shoot. “He’s sort of a James Bond character in this spot – Filming 50 Cent swaggering down the ornate staircase looked great.” said the production manager of the shoot.

The MAXIM men’s magazine used the Parlor Room and main Stair Case for a “tasteful” Women’s Lingerie photo shoot on March 08. The one-day shoot was easy and economical for the production company. With great natural light and classic furnishings, this space (with lots of interesting angles to shoot from) was ideal for Maxim. The MAXIM rep said she was very satisfied with the outcome and is looking forward to booking the space again for future use.

When Fox TV Studios, the producers of this year’s new hot series needed an accommodating area to shoot, they choose the Upper West Side. With our elegant neighbors to the left and right of our mansion location, sidewalk scenes take on a whole new dimension. Our well-kept façade with groomed ivy and potted door shrubbery makes the perfect shot for a walk-by, entrance, or exit. 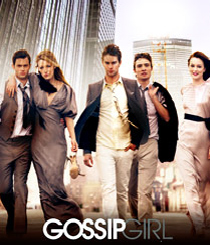 As with White Collar above;  several scenes of Gossip Girl were shot utilizing our elegant mansion as a background. Gossip Girl is an award-winning American teen drama series based on the book series of the same name written by Cecily von Ziegesar. 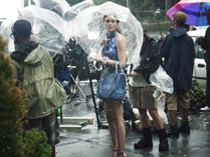 July 2010: a photo was taken from our front door during the production showing the main star, Leighton Meester who plays the character, Blair Waldorf. The front of the home was used in the shot for this scene. 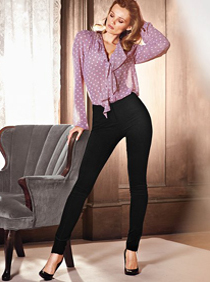 When Victoria’s Secret needed a wood-paneled room to shoot some of their fall 2011 fashion collection, our main parlor room was their perfect solution. With its old-world charm and 14-foot high ceilings, the space was the “perfect fit.”

Three top models made the elegant residence their photo studio for a several-day shoot. The mansion easily accommodated the large entourage of makeup artists, hairdressers, lighting techs, etc. The comfortable “green room” was a great staging area for the models.

During the summer of 2014, the edgy CBS crime drama UNFORGETTABLE shot a couple of elaborate scenes from inside the main parlor and dining room area where there were gunfire exchanges within the rooms and to and from a black limousine driving by on the street. With the balcony windows blowing out and squibs exploding inside, these scenes turned out to be the highlight of the episode.  Click here for the Scene Montage 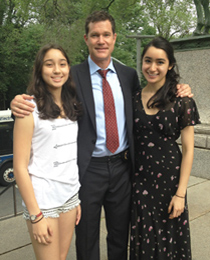 Shown left is the actor Dylan Walsh (who plays Lieutenant Al Burns) taking a break from shooting to pose with the two beautiful Miller sisters. 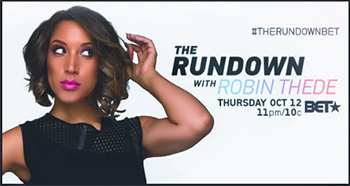 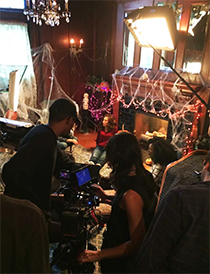 In the photo to the left is actress/comedian Robin Thede.

She’s shown filming a Halloween comedy sketch for BET in the main parlor room in 2017.
Behind her is a live working fireplace, with fake cobwebs for spooky effects.

Several additional film shoots have taken place here since this website was last updated in 2017. For example, the BBC shot two documentary-style interviews (on two separate occasions) with famous personalities such as Tom Brokaw and Dr. Michio Kaku, just to name a few. (Thomas John Brokaw is an American television journalist and author. He was the anchor and managing editor of NBC Nightly News for 22 years. And, Dr. Michio Kaku is an award-winning American theoretical physicist, futurist, and popularizer of science.)
HommeFemme 2022 High-End streetwear Fashion Shoot:  www.instagram.com/hommefemme

From Victoria’s Secret Models to Theoretical Physicists, our unique space offers a warm and welcoming experience. We look forward to working with you on your next shoot.